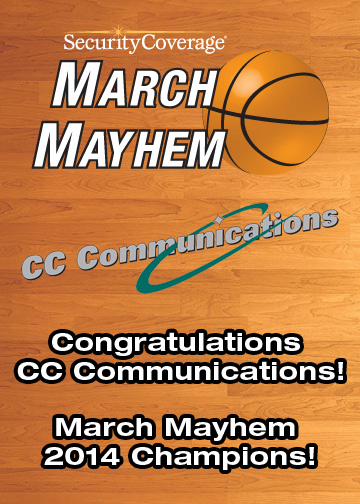 As March Madness winds down and the NCAA tournament has been narrowed down to the Final Four – the SecurityCoverage Bracket Challenge has also named a victor!

The Bracket Challenge creates a friendly sales competition between SecurityCoverage partners on a weekly basis.  This challenge operates in a bracket format so that each week, two partners are matched and the partner that increases sales the most that week progresses to the next round.

Between a pair of upsets prevailing in the first round, amazing individual performances, several other improbable upsets, and a riveting finale, it’s been a tournament to remember for the 2nd  annual SecurityCoverage’s March Mayhem Bracket Challenge!  And our final Champion is….  CC Communications!  The Prize…  A full-sized arcade Pop-a-shot that the whole office can enjoy year round!

Congratulations to CC Comm. who not only increased their penetration rate by .52% in one short month but have also won 1 years worth of bragging rights as the SecurityCoverage March Mayhem Champion!

SecurityCoverage would also like to congratulate all of our partners who participated in the bracket challenge and have seen spectacular growth in their SecureIT subscribers.

Thank you to all our partners who participated and for following the action here at SecurityCoverage Inc.  We are already looking forward to an even larger tournament next year!

“ITS GONNA BE AWESOME BABY.”